Posted on February 21, 2019 by wisdomfromafather

It’s been a straange week. It hasn’t been unusual, but it sure has been straange.

Since returning from New York, I have been battling a bad winter cold. It all started with the dripping sinuses that led to congested lungs. I noticed the drip — I mean, you couldn’t miss it — when I first arrived in New York and fought through it during my granddaughter’s wedding. Fortunately, I coordinated a primary care doctor visit for Friday, so the lungs became the issue of the day. A nebulizer treatment was ordered for the day and the rest of the weekend to help move air in the lungs {It worked going from 92% O2 to 97%}. In addition, an increased intake of C, D and zinc was ordered, along with over the counter Mucinex and Alka Selzer Cold was recommended.

I followed the directions to a “t” and am happy to report I am back in Maine and on the mend. I still get an occasional coughing jag, but I don’t feel the pressure in my chest when I do. I’ve been monitoring my condition — after 70 plus years I have some pretty good data to tap into — to stay away from my local PC provider. And I’ve been resting, resting and resting some more. And drinking. I’m not normally a water drinker, but this past week I’ve hit my recommended standards. I know the value of hydration … I just don’t just always heed it.

I’m still not completely over the hump. My eyes are still watery, my sinuses are still dripping {not as badly, though}, my appetite is still not back to normal. But I am on the mend…

On the family side, I was notified I will be a great-grandfather … again! My granddaughter Taylor — the new Mrs. Michael Seamon — has announced the newlyweds are expecting a new arrival in October!

This will be my fourth great-grandchildren … joining three great-granddaughters. The only drawback is none of them are close. Payton is in Iowa; Addi and Harper are in Ohio; and No. 4 is currently growing in New York.

Our God has certainly given me quite a quiver …

And that brings me to my books, Heaven Shining Through and Wisdom From a Father. Right out front, let me state marketing an independent book is hard, hard, hard, time-consuming work. But let me bring you up to date.

It’s hard to believe, but the novella Heaven Shining Through, will be celebrating its first anniversary next month. Over the past few months I’ve seen it slowly gaining traction outside my family and friends circle. Reviews have been coming in — mostly positive — although it’s sort of stuck between a Christian/non-Christian rock. Pure Christian reviewers are sometimes taken aback by its realism, while non-Christian reviewers tend to shy away because of its message. I don’t like to self-promote, but I invite all of you — my followers — to gauge for yourself and, if so inclined, invite your followers to do the same.

Wisdom From a Father is going a little slower. It hasn’t found its voice yet … especially as an eBook. Very few electronic versions have been viewed or purchased, despite dropping its price to 99 cents during the holidays and currently dropping it again to 99 cents.

The paperback is selling a little better and, in fact, I will be receiving my first royalty check at the end of the month! Okay, it won’t buy me a celebratory breakfast, but it does reflect early sales over its first two weeks of life. 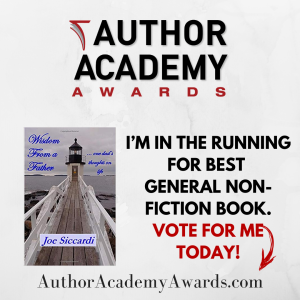 Both books were just accepted for the 2019 Author Academy Awards. I will be providing more information, but it comes down to vote, vote, vote! Results will be announced in the summer with an Awards Ceremony in October.

Both books have also been  featured on AllAuthor’s Book Directory.

Bottom line is there is a rumbling in the publishing field regarding these two books. I believe when they take off they will take off! But the waiting is driving me crazy!

THOUGHT TO REMEMBER: Even when I mess up, God still loves me.