Posted on December 20, 2018 by wisdomfromafather

It looks like today is the last day for Round II balloting for AllAuthor’s Cover of the Month contest. I’m not sure I’ll survive the round, but I am proud of the way the cover has been received and thankful to those who have supported me and the Wisdom From a Father cover over the past few weeks. 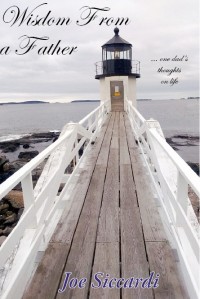 As of the moment, I’m still sitting at #32 on the list, which initially drew hundreds of submissions. After the first round paring to the Top 50, I actually surged to page 1 and in the Top 25 for awhile before other hopefuls slipped past me. The next round will be paired to the Top 24.

It’s not totally out of reach. Thus far, I have 97 votes, which is just nine shy of the Top 24 and 13 tallies short of the Top 20. But sand is slipping through the hourglass. The cut will be announced in less than 24 hours.

I was more than pleased with the way the cover evolved. Using a photo I took of Marshall Point Lighthouse in Port Clyde, ME. I envisioned the long planks hopefully inviting readers to the lighthouse and, in turn, to open the book. The type — Edwardian Script — was chosen to be personal and intimate. In my mind’s eye, I saw the combination as  blends the illumination, resilience and comfort of the lighthouse with words that hopefully guide, build inner strength and give hope.

There are joys … there are tribulations … there are reflections … there is every day life on the pages — some serious, others with tongue in cheek, all updated from selected essays over the years. Reactions and reviews have been few — it’s been available as an e-book for only a month and paperback for abut two weeks — but positive as I try to build traction for the non-fiction memoir. And this contest has been one way to catch prospective readers’ eyes.

The AllAuthor promotion isn’t about gain, but rather exposure — an author’s best friend. The winner will get Pro-Membership and the first two runners can feature one of their books for free. In addition, the winner and runners up of all months will be permanently listed on a separate Cover of the Month Winners page on the AllAuthors site and the winners and the runners will get digital badges which they can flaunt on their websites and social media.

Voting is at https://allauthor.com/cover-of-the-month/3418/. You don’t have to be a registered user of AllAuthor to vote.

Again, thanks to all who have taken the few moments to vote for the Wisdom From a Father cover and for your support of me and the book! God bless.

THOUGHT TO REMEMBER: Mean what you say and say what you mean.