Posted on April 6, 2017 by wisdomfromafather

If you want to gauge the worth of a children’s animated movie, go to a matinee … then listen. You have to have a discerning ear. You have to be able to distinguish between children laughing for the sake of laughing or truly enjoying themselves for an hour and 37 minutes.

That what I did for The Boss Baby, the newest DreamWorks release. And I can report the younguns truly enjoyed themselves.

For adults, the premise is pretty silly, but for the – let’s say – seven to 12 year old set, the giggles started before the opening credits and continued throughout the show. 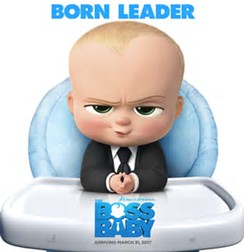 Our protagonist (voiced by Alec Baldwin) isn’t really a baby, but is on the middle management team at Baby Corp – where babies come from. His task is to prevent former Baby Corp exec Francis E. Francis (Steve Buscemi), now head of Puppy Co., from unveiling a new lovable forever puppy and siphoning off love of babies.

While Mom and Dad (Lisa Kudrow and Jimmy Kimmel), who happen to work for Puppy Co., accept this new suit-wearing baby, seven year old Tim (Miles Christopher Bakshi) sees right through the facade. And he feels the loss of affection as his family of three swelled to four.

The animated film is really seen through Tim’s overly-imaginative perspective, which just adds to the laugh track. Through the help of a just as imaginative narrator (Tobey Maguire), young Tim tries to convince Mom and Dad the baby is an imposter as the rigors of parenthood sap their strength and take time away from poor little Tim. As they snooze on the couch, Tim calls out for his nightly three stories, five hugs and favorite song and cries himself to sleep after unsuccessfully negotiating for just his favorite song.

Since he can’t really sleep, he “catches” Baby talking on phone to his superiors and plans his big reveal to Mom and Dad by recording the brusque Baby as he maps out strategy with fellow Baby Corp employees, Jimbo and the Triplets. Of course he gets caught and a wild chase scene through the backyard – again enhanced through a seven year old’s perspective. It probably was the highlight of the show for my younger fellow moviegoers.

The tape gets destroyed and poor Tim is sent to “solitary” to reflect on his non-acceptance of the Baby.

Eventually, the two figure it might be in their best interest to work together. Baby wants to complete his mission and return to a corner office at Baby Corp and, of course, Tim just wants him to leave.

They go to Puppy Co. with Mom and Dad as Francis E. Francis gets set to launch the new lovable puppy at a convention in Las Vegas. They uncover what they thought were the secret plans only to fall into a trap set by Francis E. Francis, who convinces Mom and Dad to let Eugene-ia (Conrad Vernon) babysit the two boys and whisks them off to Las Vegas for the launch.

Tim and Baby enlist the aid of the other pint sized crew to escape from Eugene-ia in another seven year old fantastic adventure and reach the airport just as Mom and Dad board the plane for Las Vegas. So they have to figure a way to get to Las Vegas by crashing an Elvis Impersonator charter.

The plane ride proves boooring until Tim unleashes his imagination –bringing Baby along –and the two take a pirate adventure to Vegas where they manage to stop the launch with seconds to go.

Of course, with the success of the mission, Baby heads back to Baby Corp and Tim realizes how much he missed his baby brother.

Oh, the quiet in the theater. You could hear the little minds of the moviegoers ticking as they pondered the values of sharing and working together and having adventures and – sure enough – Baby returns to his family and Tim welcomes him with open arms!

It was a fun, little movie. The jokes and pratfalls were tasteful and age appropriate.

I don’t know if it was the visuals – I mean, a baby in a suit with a backside flap and sock garters, what’s not to like? – or the sometimes nonsensical plot or the message of the value of bonding that captured the little ones’ attention. Just for a moment I wished I was in that seven to 12 year old range to understand the movie more fully.

Then it hit me. It was just plain fun.

THOUGHT TO REMEMBER: If you love something, set it free … If it returns, keep it and love it forever.

2 Responses to The Boss Baby