Posted on January 26, 2017 by wisdomfromafather

I went to a funeral a couple of weeks ago. My Aunt Barb — who was more like a cousin because of our ages — died. It was a typical funeral … catching up with my Uncle Dave and cousins Sharon and Mark and meeting their children for the first time. One of the drawbacks of modern life is mobility. Barb and Dave were skirting around the east coast, while Karen and I made our way in the opposite direction.

We would keep in touch by phone, the last time being just before Thanksgiving. She never mentioned she had stage 4 cancer  so it came as a surprise when I heard of her death. But, that was Barb. She never wanted anyone fussing over her. 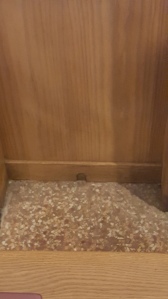 A Mass of Christian Burial was offered at Holy Redeemer Catholic Church in Cleveland. But I wasn’t awed by the ornate sanctuary, the readings by her grandchildren, the words of Father Marty, the celebrant, the smell of the still fresh Christmas decorations or the skillfully carved statue of St. Francis of Assisi sitting on a park bench with his “friends.” No. What caught attention was a “mouse hole” in the front pew railing.

Now I’m sure it wasn’t really a mouse hole or door, but it sure looked like it. It was probably a plug camouflaging a junction box or something.

But it caught my attention and triggered my imagination. I could “see” a fictional mouse with a long tail … a church mouse. And out he came to sit on my shoulder during the service — yes I do speak with fictional furry friends.

I don’t know if he was a poor church mouse, but he was a quiet church mouse … just sitting on my shoulder during Father Marty’s homily.

“He does a good job,” the mouse finally said. “I’ve heard him hundreds of times.”

The point the homilist was trying to make is it isn’t what we do in life, it’s how we share that life and the legacy we leave. The mouse pointed to my cousins and their children and said, “That’s her legacy.”

He went on to say he had seen sadder funerals, not because of the crying or weeping, but because the “legacy wasn’t there.”

I do have to say my new found friend with the long tail was right on. We all have been given a set time and it’s what we do with that time that matters. We can’t squeak [no pun intended] out one more second. When we get the call, we get the call.

In talking with Dave, he mentioned how this was supposed to be their time. They had just done some planning and were getting ready to enjoy life in retirement. I told him simply, “I can relate.”

Life goes on, with or without us my furry friend added. “It’s not what we do that’s important. It’s the relationships we nurture, the foundations we build, the legacy we leave. It sound like Barbara knew that.”

RIP, Barb. Enjoy your time with Jesus and Grandma and your brothers and sisters and your friends and relatives. Until we meet again …

THOUGHT TO REMEMBER: God’s light shines greater through “cracked pots” than it does through those who have it all together.

7 Responses to The Church Mouse