He Is Not Here

Posted on April 12, 2020 by wisdomfromafather

I don’t usually re-post, but for this Easter season, I thought it appropriate since there are a lot more followers than 2014 when I first posted. So, for my new-found friends, this is for you. And for my regular readers, this is a reminder.

Once again, I’m dipping into some words from my pulpit days at Tyre (NY) Reformed.

I’m not a preacher so you’re not going to get a sermon this morning. But I am a journalist and editor, so you’re in for an editorial comment.

My wife may have disagreed with me, but I feel my training as a journalist has made me a listener. And I know one of my God-given gifts is discernment. It is with that background I offer these thoughts on the Scripture we’ve heard.

As a journalist, we’ve been trained to not only listen to words, but to connect the rhetoric to a broader picture. Often, what is said is secondary. The real story is the circumstance in which those words are uttered. 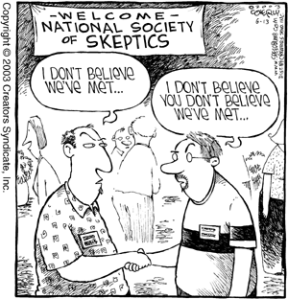 Four witnesses. Essentially, they recount the same story from four different perspectives, each subtly different, yet remarkably the same. The skeptics may dismiss them as repetitious. Of course, they reason, the stories are the same. It is to reinforce a message … not necessarily true. Of course the Scripture of the New Testament fulfills the prophecy of the Old Testament. The New Testament is hollow without fulfillment.

You know what I say to the skeptics?

Be damned … and that’s exactly what will happen.

I can say this because of the four accounts we heard. He is not here. That’s the story.

It’s ironic. Those who were closest to this man Jesus Christ knew Him only superficially. The Twelve, the followers, the people of the time saw Him and His miracles and looked at Him as the Messiah. Only they were looking in the wrong place. They were looking at the temporal …. They were seeing only the fluff … They were awed by the miracles … They were expecting liberation in their lives …

Doesn’t that same irony exist today? As Christians, followers of Christ, don’t we complacently sit back and watch as the world self destructs? Haven’t many of our church leaders compromised the foundation of our Christian belief — this book … Holy Scripture — for the sake of political correctness? Haven’t we Christians allowed the agnostics and atheists around us — the minority few — to dictate to us what we can and can’t do in the name of Christ? Haven’t we heard enough about tearing down crosses in cemeteries and taking prayer out of school and allowing the wanton carnage of innocent life in the womb?

It has been 2,000 years since the Word of God became flesh and dwelled among us, but the world was not thereafter immunized from evil. Given the extraordinary development of modern science and technology, we have witnessed instead a dramatic increase in our capacity to inflict ever more horrifying evils upon one another and the created order itself.

We know Christ. We say we follow Christ. Yet we allow this to happen.

The anti-Christians also know Christ … better than we. And the legion of Satan is doing its best to make sure we are blind-sided. It was that way in the beginning. Our readings stopped short. In Matthew 28: 11-15, for example, we are told of the great cover-up. The chief priests and elders told the guards to say His disciples came during the night and stole Him while we were asleep … and this story has been widely circulated among the Jews to this very day. And it remains that way to this very day. 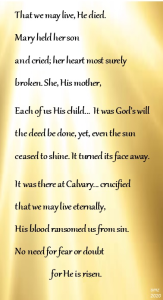 Christ came into this world as a bridge, allowing sinful man an avenue, an access back to God. That bridge is the empty tomb.

Easter is at the heart of Christian faith and worship. The empty tomb is the saving event that gives the entire New Testament its theological shape and direction because the Resurrection is the centerpiece of the paschal mystery, the Lord’s passing over for the sake of our salvation from life through death into eternal glory at the right hand of the Father. If Christ has not been raised, Paul wrote, your faith is futile; you are still in your sins (I Corinthians 15:17).

The death-to-resurrection dynamic remains at the core of the whole Christian life, and indeed, of all human life as well. We can only truly live if we are prepared to die to self and to live for others, in fidelity to the truth. As Jesus told us Himself, Unless a kernel of wheat falls to the ground and dies, it remains only a single seed. But if it dies, it produces many seeds (John 12:24).

Today will echo the traditional profession of faith “He is risen.” The air will be filled with “Alleluias” and the mood in our virtual churches will be appropriately festive.

On Monday morning, however, the world will look just about the same as it did yesterday. Violence, poverty, homelessness, oppression, hatred, greed, and injustice will continue unabated. The light of the risen Christ, so joyfully proclaimed today, will not have penetrated the earthly nooks and crannies of sin and apathy.

This shouldn’t shock or disorient us. We know sinners don’t automatically cower under the shadow of the cross, nor does the world become instantly cleansed by the sunlight of morality at the first intonation of the Easter Gloria.

And yet we continue to plod along, stumbling along just like the chosen ones waiting for the infusion of the Spirit, ready to do whatever we can to push back the forces of evil by becoming ourselves weak and imperfect instruments of the grace of the Risen Lord.

Because He died, we are saved. But because He lives we live alive in the hope, knowledge and confidence all Christ said, did, and promised — as documented in this book, Holy Scripture — is true and accurate. But it’s not the words. They can be interpreted in many ways. It’s the message. He promised to be with us always. He promised us a resurrection. He promised us eternal life. Not an easy life … just an eternal life.

Because He lives. Not because he lived. He lives. In the present tense, an active verb.

That’s the miracle of Easter. That is what Easter is all about.

THOUGHT TO REMEMBER: Perseverance is as much about a strong won’t as a strong will.

4 Responses to He Is Not Here