Posted on March 4, 2020 by wisdomfromafather

It’s time for some Midweek Mirth so let’s smile a little! 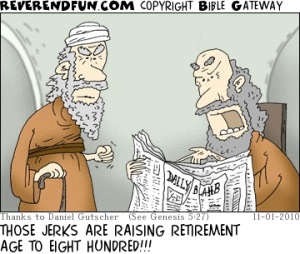 Radio To The Rescue

The foreman for a construction company was interviewing an applicant. He asked the plasterer to bring his tools in so he could see what he could do. The fellow returned with tools slung over his shoulder and hanging from his pockets.

In one hand he was holding an unidentifiable object covered in plaster. The foreman asked what the object was.

“My radio,” said the applicant.

“All right, you can start tomorrow,” said the foreman.

The applicant looked surprised. “That’s all? You don’t want to see what I can do?”

“Any plasterer with a radio looking like that one must have put in at least three years of work.”

Hospital regulations require a wheel chair for patients being discharged. However, a student nurse found one elderly gentleman already dressed and sitting on the bed with a suitcase at his feet, who insisted he didn’t need her help to leave the hospital. After a chat about rules being rules, he reluctantly let her wheel him to the elevator.

On the way down she asked him if his wife was meeting him.

“I don’t know,” he said. “She’s still upstairs in the bathroom changing out of her hospital gown.”

THOUGHT TO REMEMBER: [Humanity] has unquestionably one really effective weapon — laughter. Power, money, persuasion, supplication, persecution — these can lift at a colossal humbug — push it a little — weaken it a little, century by century, but only laughter can blow it to rags and atoms at a blast. Against the assault of laughter nothing can stand. — Mark Twain