I Shouldn’t Poke Fun at Massachusetts … But I Will

Posted on February 20, 2020 by wisdomfromafather

In my close to three score years of driving in 33 states plus the District of Columbia, I can confidently say the most stressful of my million-plus miles has been on the roads in Massachusetts. Hands down. Without equivocation. And that’s saying something since I first got behind the wheel in New Jersey where speed limits are suggestions, interstate traffic speeds up as you approach an urban zone, narrow roads lead to slalom runs around double parked cars, and it’s quite common to see a Mercedes passing you on the left while a  beater with pieces parts missing passing on the right. Even New York City traffic is less stressful than maneuvering the highways and back roads in the Bay State.

The difference, I think, is anticipation. Every where I drove, I could figure out pretty quickly traffic patterns, traffic signage, drivers’ reactions, etc. You know, all the idiosyncrasies of the region.

For the most part, they have no concept of lanes on the interstate — right is for entrance and exit, middle for travel, left for passing. Drivers tend to drive at their own pace — fast, slow, or in between — in whatever lane they happened to be parked in. That, of course, leads to a lot — A LOT — of weaving in and out for the 90ish driver to get by the 45ish drive in the left lane on a 65 mph road. Yes, it happens all over, but Massachusetts drivers have it down to an art.

Even on local roads, it’s anybody’s guess what the medium speed will be. It’s sort of a speed du jour, not at all dependent on road conditions, weather, or traffic. What makes it trickier is there is no such thing as a straight road. A tenth of a mile as the crow flies is about a quarter mile.

Signage is another issue. You can figure them out, but as an out of state driver, you really have to think about what the signs say which puts you at a distinct disadvantage wile traveling. What is commonly referred to as a U-turn turns into “to reverse direction”. Forget about painted exit road lanes. They just abruptly end … or point you to the right lane when you really want the second right exit or the left lane {which goes to a “reverse direction”} when they mean the second left. My favorite sign was “Densely Settled”, of course referring to a residential area.

I also noticed a lot of Massachusetts drivers backing into parking spaces. I never understood why since you generally have to back up to leave anyway. I can understand backing out of a parking space at a mall, grocery store, or WalMart can sometimes be a challenge when parked next to an SUV or fancy, dancy pick up truck with people and cars intentionally meandering by you as soon as the white light goes on, but, for the most part, these drivers don’t know how to back up. They don’t know what mirrors are. They don’t know what white lines mean. They rationalize sideways is close enough. 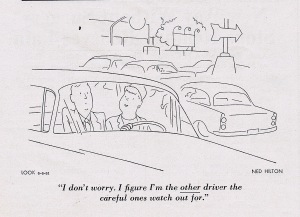 The other day in a parking lot, I was stopped while a guy tried to back into a space. He backed up … pulled forward to straighten out … backed up … pulled forward to straighten out some more … backed up about a quarter of the way in … pulled forward for some unknown reason … backed up about halfway in … pulled forward apparently because the last two tries were so much fun … then backed about three quarters of the way in — just enough to let me get by. I zipped into a vacant spot about three or four cars up, got out, locked the car, almost got run over by the same guy who suddenly pulled  forward again. I just had to pick up some dog food, so it was a quick trip. As I approached my car, I noticed my parking buddy. He was backed in — crooked with the front right tire resting on the white line.

As I was shaking my head in disbelief, the Hyundai Sonata Smaht Pahk Super Bowl commercial flooded my mind. Boston. How appropriate.

THOUGHT TO REMEMBER: Happiness is a choice. You can choose to be happy. There’s going to be stress in life, but it’s your choice whether you let it affect you or not. –Valerie Bertinelli