Posted on January 23, 2020 by wisdomfromafather

A couple of weeks ago, I mentioned I had officially ended my late year journey. I’ve been keeping you posted with the blessings the Lord has given me in the three months of travel visiting with each of my children, their children and their children’s children.

I did have an annual, routine doctor’s appointment in Maine Wednesday (Jan. 22), so I decided the next leg of the journey will be reversing my trip in smaller chunks. Thus I stayed in South Carolina for a few extra days, then headed to Kentucky, Ohio — with a detour to Indiana for a night visit with a friend — New York, and Massachusetts. That  set me up for an overnight trip to Maine where I connected with some old friends, some new friends. Currently I’m back in Massachusetts for at least few days. I was asked — and accepted — two pulpit supply assignments in Howland, ME, Feb. 16 and 23 so I at least know I will be nesting probably in Massachusetts towards the mid to end of February.

But, I’m not going to get ahead of myself. This post is a share of the adventures from Jan. 1. Quite frankly, they have been “bonus” stays with the family. I had an opportunity for one-on-one lunches/dinners with each of them. So many blessings. Little ones. The unexpected call. The encouraging word. A little rain and a little sunshine.

A safe, uneventful journey from South Carolina to Kentucky to Indiana to Ohio to New York to Massachusetts to Maine to Massachusetts is always a blessing. As the mile markers whizzed by, my neurons were in full speed free range leading to interesting thoughts to consider. 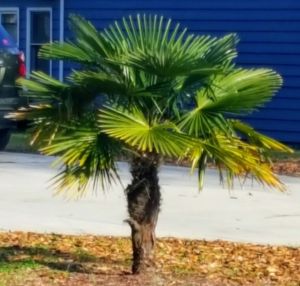 New Year Day I took a walk soaking in the sun and sights of a new year … southern moss hanging from the trees, palm trees starting to reach up to the skies. Angelina served as an able wingman. Two gracious Southern belles slowed to talk about how precious she was.

A couple of hours at the beach is always a blessing. I visited with locals who were complaining how chilly it was (mid 60s). Angelina again was a conversation starter, attracting five doggies and their owners. Four we’re bigger-than-her boys whom she had under her wily spell — especially Danny. The fifth was a girl poodle. They didn’t fight or growl but you could tell they were not going to be besties. 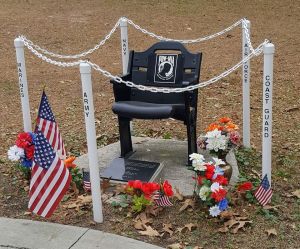 I always talk about the centering at the ocean front. But another blessing was finding a treasure park in Myrtle Beach — Warbird Park. The park, adjacent to the Myrtle Beach Airfield, is a well laid out trail highlighting those served and died. It contains offshoot pods containing monuments and is dominated by three jets in formation. A great way to remember the past.

I had a nice Kentucky dinner with Athena, Deshawn, and son Joe. We talked about books — especially reaction to My Name Is Sam — work, and life in general … three of my favorite topics. Also had a nice dinner with Joe and Sarah sharing family memories. You can’t take them away from me. 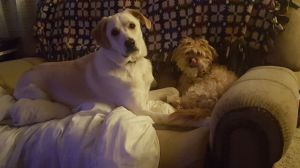 Angelina and I did some more Kentucky exploring — without getting lost. I also enjoyed watching Angelina and Puck playing together. They tuckered each other out, so the three of us took a blessed nap — Puck curled next to me and Angelina between my legs. 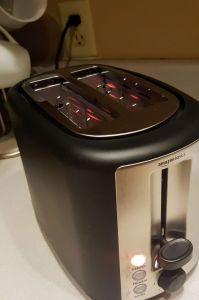 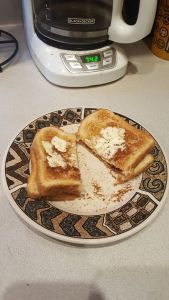 It’s often the little things in life that make the biggest impact. I purchased a toaster for my son. Hard to believe, my middle son didn’t have one so I gave him mine. Oldest son also was without a toaster so I bought him one today. Guess what I had for breakfast!

Food and fellowship filled my last day in Kentucky beginning with toast! It continued with butter, peanut butter and jelly on toast for lunch and was wrapped up by attempting Food Network’s Delicious & Easy Steakhouse Dinner for Two. Not too bad … tasty but I wouldn’t categorize it as easy. Still a blessing to share it with my oldest son. 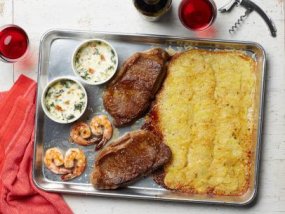 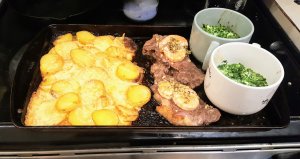 My one night stay in Indiana was with friends. We had a good conversation and caught up after a two year absence. Always a blessing. Before leaving, Dave called my cousin Joann in Virginia. We had a great connection, catching up after about 50 years. One of her comments was she always felt wanted and special when she visited with my mom and dad. Way to go mom and dad. You done good. I was blessed.

I woke up in Ohio to a brilliant sunrise … which set the tone for the entire day. The day was capped with another nail-biting Packer Divisional win — watched with my two grandsons.

All along the trip, I  was able to join in family events I’ve missed in the past. On the return trip I went to one of Gavin’ s sixth-grade basketball games. Lake won.

It’s all about family. I say it all the time. I saw it in person, up front and personal. The Kohlhofers — my daughter — try to plan a family dinner at least once a month. The three boys and their families congregate to break bread, tease each other, and just enjoy each other’s company with loads of laughter. Plans were made for February and March. All my kids have the family bond and traditions. But tonight was a special blessing because I WAS HERE TO WITNESS IT!

Thanks to Jay, I was “requisitioned” to cook my specialty, Chicken Kiev for Dee (“first time in … forever”) and Gavin (“first time … ever”) on the last night of the Ohio leg and for the crew in New York. First time the New York kids had it. Another success if I say so myself. Blessed to be able to share it with them. My morsel even had a smiley face! 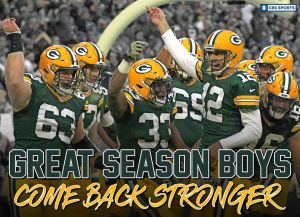 It wasn’t the outcome I was hoping for, but watching the NFC Championship between Packers-49ers with my daughter was a blessing. She was happy. San Fran moves on to the Super Bowl. As a Packer fan I was blessed with an exciting season where Green Bay played well beyond expectations and returned to the playoffs since 2016.

I read a Kindle book to Hayleigh on my first night in Massachusetts. Ben was hiding because he wanted a dinosaur book rather than the one chosen, That Bird Needs Glasses. 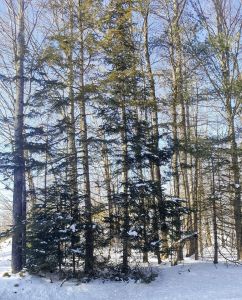 I  enjoyed the trip up to Maine. Clean, cold air. Snow draping on the trees, glistening in the bright sun. Ice floes in the rivers and lakes. A good dinner at Ground Round. Decompress time … blessing.

Yesterday GI received a good preliminary report from the doctor. First appointment of 2021 is on the calendar.

There you have it. I titled the post … Epilogue? because this road warrior’s adventures still aren’t over. I’m sure there are more adventures and discoveries awaiting me before I finally find a more permanent pillow for my head. 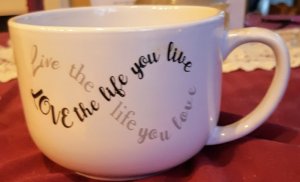 At the outset, I had determined the trip would be serendipitous. I turned it over to the Lord. Thus far, He hasn’t answered, although I do know He has a plan. He always has a plan. So we’ll see where the Spirit leads me. Who knows? Maybe the Lord just wants me to do a little traveling and visiting and observing His presence in everyday life. And I’m good with that.

THOUGHT TO REMEMBER: A person who never made a mistake never tried anything new. — Albert Einstein