Posted on February 6, 2019 by wisdomfromafather

So, let’s smile a little! 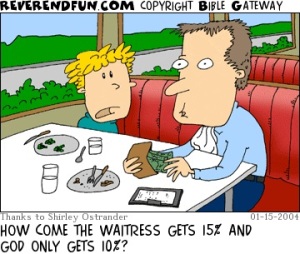 There were two men in the hospital. For conversation, one asked the other patient — with bandages from head to toe — “What do you do for a living?”

The first patient asked, “When did you give it up?”

He replied, “Halfway down.”

The Value of a Brief Sermon

The best illustration of the value of brevity in preaching was given by Mark Twain. He said when he had listened for five minutes to the preacher telling of the heathen, he wept, and was going to contribute $50. After 10 minutes more of the sermon, he reduced the amount of his prospective contribution to $25. After a half-hour more of eloquence, he cut the sum to $5. At the end of an hour of oratory, when the plate was passed he stole $2.

THOUGHT TO REMEMBER: Those who don’t believe in magic will never find it. — Roald Dahl

I'm just an ordinary guy walking along the journey of life.
View all posts by wisdomfromafather →
This entry was posted in midweek mirth and tagged career, cartoon, DPchallenge, God, humor, mirth, sermon. Bookmark the permalink.