Heaven Shining Through continues to make its mark. In the past few days, I have heard the comments, “That was my story”, “I shared it with the kids {skipping over just one part} and it opened up some interesting conversations with them”  and “It had everything — laughter, tears, lows and highs”.

But it all comes into focus when I share the back story, the story about the story, how it came to be. That explains its relatively short length and how an old guy {not middle aged, but thanks} came to write as a teen aged and middle aged Samantha. So I decided I would share it with you, just as I shared it Live during the book launch late last month. 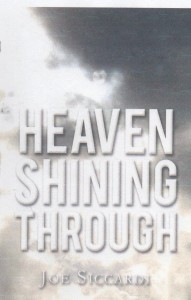 They sort of do their own thing, head for the sun, head out of the sun, play, eat, whatever.

Well, my thoughts are like those free range chickens. They just wander where they may. There’s no pattern. And trying to corral those thoughts is sometimes challenging!

As you heard, I blog. It’s interesting to see what filters its way from the mind to the screen and ends up as posts. For example, over the years, I’ve written about such diverse subjects as birds, dreams, biorhythms, memories, my trips back and forth to Maine, some sermons and flannel. Yes, flannel! I also participate in a weekly exercise called Five Minute Friday where a group of us – mostly young mothers – latch onto a word prompt and just run with it for five minutes of unscripted writing. It’s a highlight of my week. A couple of weeks ago, the word was “stuck” … so I’ll tell you what I often told my wife. “Too bad, honey, you’re stuck with me.”

A funny thing happened to me on my way to a post way back in 2012. I got this crazy idea it might be cool to work on a collaborative community “novel” … or at least a short story. I invited readers of both the blog and my newspaper at the time, the Reveille/Between the Lakes, to contribute to an ongoing story. As long as there was interest, I promised to continue to advance the storyline.

I had no expectations about where the story would go. In fact, I didn’t even have a storyboard or an outline. I was trusting in my readers’ imagination and direction. Would it end up being a mystery? A romance? A comedy? A drama? A slice of life? Inspiration? A bust?

We’ll decide together, I told them.

The response wasn’t overwhelming – about 17 in what was still a fledgling blog site – but it was enough to at least give it a try. I started the story with these words…

I drove alone on the black asphalt, which looked darker because of ominous clouds on the horizon ranging from dark gray to puffs of white. Out of the corner of my eye, I caught a glimpse of white as the sun tried to peek out from behind the clouds. It didn’t succeed at first, but a ray rained into the picture, followed by a halo of rays.

“There you go, readers,” I wrote, “My name is …” and what is his or her story? Why was he/she on the road? Where was he/she going? What did the rays mean? How do they relate to the story?

That’s when things got interesting. One of my followers suggested our main character should be named Samantha and before I could stop my frozen fingers from actually naming the lead Samantha, there it was. A response to a response. A scary response because I now had to think as a girl or woman – a tricky point, as every guy knows. But I was sure I would get some help as we fleshed the story and developed Samantha’s role.

“We started the story,” I wrote, “but why is she on the road? Where is she going? What is her history, relationships, her story?”

The rays disappeared as quickly as they had appeared as the clouds stitched themselves closer together, and I was once again left with just the asphalt and the clouds. The darkness sucked away the happy memories. I was driving toward the darkest patch of clouds, and I was in no hurry to return to my girlhood home.

That’s it, the end of contributions. But I felt I had started something, so each week – I called it Wednesday Writing — I continued to add to the story.

By Week Four, with readership still increasing but contributions still non-existent, I was faced with the decision of whether to cut my losses, make this one of the shortest stories ever written or continue solely on my own. I choose the latter and decided to go a flashback route, which starts with Chapter Two. And I chose to surround Samantha in the familiarity of my northern New Jersey home and its unique locations in the 1960s.

I decided to develop a rocky relationship between Sam and her seemingly always critical mother. But I did create an “out” … the kitchen.

I always followed Mom around the kitchen, and I soon learned about her critical nature. However, one time when I was about five years old, she handed me an apron and had me mix the chocolate chips into the cookie dough. This was a monumental task for a five-year-old, and a good deal of the batter ended up on my once-clean apron. I started to cry, but Mom scooped me up in her arms and said, “Sam, that’s okay. That’s why we wear aprons when we cook.” When it came to the kitchen and cooking skills, Mom was open and forgiving.

By Week Nine, I really started to panic and posted, “We can use your help! Especially from you girls! We really need a female perspective in the ways of life and love!”

It never came. I was on this writing island with free range neurons suggesting the next words and phrases based solely on my 40 year relationship with my wife and two daughters.

And then came Chad at the end of Chapter Two. Kicking off Chapter Three, I first met Chad at – where else? – a club. Bernie, Betty, Lynn, and I had decided to have a girl’s night out to celebrate.

“There you go, readers,” I wrote. “We still have to develop Samantha’s story. Who is Chad? Was he Mr. Right or just another cad? What’s his story? How did she meet him? What’s next? Again, girls, we can use your input! Dig back to your memory {or fantasy} of growing up as an 18-19 year old.” The “we” of course was “me”.

And so it went, week by week. By Week 16, my Judeo-Christian beliefs kicked in – actually they were there all along — and I thought the story should have a deeper meaning. From that point Samantha started to understand there was Someone bigger than her, which ultimately led to her own restoration and a deeper relationship with her mother. That became the focus of the rest of the story.

Eventually in the 20th weekly installment – I know, as I look back it was more of a soap opera than a story — the flashback ended with

CRASH! … The crash and shrill comment awakened me from my nostalgic Neverland and brought me back into reality. “Mom?” I cried out, at the same time realizing my hands were immersed mid-forearm in soapy water.

The exercise lasted 24 with over 200 likes from my followers. Eventually, I closed the story with

I found myself driving home alone on the black asphalt, which seemed darker because of ominous clouds again on the horizon ranging from dark gray to puffs of white. Out of the corner of my eye, I caught a glimpse of white as the sun tried to peek out from behind the clouds. It didn’t succeed, but first a ray rained into the picture, followed by a halo of rays.

I remembered my conversations with the kids when we had seen a similar canvas in the sky that day. They’d thought the light was heaven shining through.

I knew they were right.

That’s a recap Heaven Shining Through without spoiling the script. It’s a story of two strong women and one daughter’s self-realization and recognition of the presence of God in an ordinary and sometimes messy life.

An interesting side note to the story is how Maine comes into play. It was here about five years later – sometimes at my desk overlooking the river, other times on the patio outside with the dam as white noise or in the forests, mountains or coastline with laptop in hand – I was able to re-visit the story, clean it up, add some dialogue, delete some duplication, turn it from random segments into a cohesive story. I hope you agree!

May you always see Heaven Shining Through!

That’s the background on how Heaven Shining Through went from a series of random posts into its current novella form. I hope you enjoyed it.

Heaven Shining Through is available online at Xulon, Amazon and Barnes and Noble, or directly from me at revblt@rocheter.rr.com. The book is also available at Chloe’s Collections & Florist, Dover-Foxcroft, and The Mustard Seed Bookstore, Bath, ME.

THOUGHT TO REMEMBER: Spend time with the elderly. The key to your future could be held in the past.