Posted on May 6, 2017 by wisdomfromafather

There is just something special about watching the sun rise. We open our eyes to a new day every day — but when you watch the sun peek over the horizon … Wow! It just brings God’s wonder into the here and now.

The same is true for sunsets as you watch the sun drop out sight for the day, often with such spectacular colors.

I’ve been blessed. I’ve seen my share of both through the years. Despite being a city boy, I came to appreciate the daily ritual early in life.  As a kid I remember seeing the sun rise over the ocean in Seaside Heights, NJ. Don’t tell anybody, but as a teen I remember watching the sun peek over New York City from a Garrett Mountain (NJ) vantage point. Karen and I made it a point to watch the sunrise during a family vacation to Florida and we watched the sun do its thing at the Seaside beach. A repeat was on our bucket list — I made it but unfortunately she didn’t. We watched the sun rise over Cayuga Lake (NY).

And we were fortunate to live in upstate New York where the sunsets were just breathtaking. We could sit for hours watching the sun go night-night over Seneca Lake (NY). 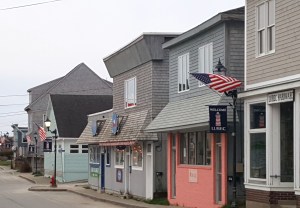 I have been known to head east for a morning rendezvous with the sun. I witnessed it again yesterday (Friday) when I deliberately headed to Lubec, ME, just for the sunrise. But in Lubec, it’s not just another sunrise — it’s where the sun first shines its light in the United States. Lubec is the easternmost town in the country.

I actually had been planning on returning to Lubec {I was there five years ago while house hunting in Maine}, especially since it is in Washington County — next on my quest of hitting every county in Maine {one more to go — York County!}. I had actually planned on going back in March but it was till too cold and in April which was just a ridiculously busy month. Then there was the weather. You don’t want to expend all that energy on a rainy morning. Friday appeared to be the right window — just after the midweek rain and just before the weekend rain. Weather Underground said there would be light clouds building to overcast preceding the rain.

So I set my alarm for 1 a.m., scarfed a cup of coffee and muffin and hit the road for a just over three hour drive to the coast for a 4:40 first light and 5:13 sunrise. I pulled into the municipal lot at 4:30 — perfect timing.

First light was a spectacular show .. but 5:13 stretched to 5:15, then 5:20. By 5:25 I realized the light clouds turned into a definite overcast. So I drove over to the West Quoddy Head {technically the easternmost point of the contiguous United States} just southeast of town on an easterly-pointing peninsula overlooking Quoddy Narrows, a strait between Lubec and Campobello Island, Canada, that provides access to Passamaquoddy Bay and harbors located on the St. Croix River and other rivers which the empty into the bay.  It was there I spotted Mr. Sun, not peeking over the horizon, but between clouds.

Mission accomplished. I was going to stop for breakfast at the Sunrise Diner in Lubec, which was supposed to open at 6, but was still shuttered at 6:30, so I headed back to Dover-Foxcroft with a breakfast stop en route at Helen’s Restaurant in Machias. French toast with sausage links and a bottomless cup of coffee fueled me for drive home.

Not everyone is going to make it to Lubec — or the ocean — for a sunrise show, but I really recommend you get up before the birdies some morning and just look due east. You won’t be disappointed and you’ll start your day with a new perspective and appreciation for nature — as God designed it.

The Bridge to Campobello

THOUGHT TO REMEMBER: The best things in life aren’t things.