Posted on July 9, 2016 by wisdomfromafather

Happy Saturday! Time for Five Minute Friday! We’ve been through this before. Just accept my Friday posts on Saturday.

Five Minute Friday is an opportunity to focus on a prompt word for five minutes (more or less), write a pithy post and share it with others at Kate’s place (http://katemotaung.com/2016/07/07/five-minute-friday-build/). It’s an exercise that keeps your mind sharp … and introduces you to a world of thought on the prompt from the other talented participants. It’s free. It’s easy (okay, not always). It’s addictive (in a good way). You should visit and check it out or — better yet — join in the fun of expressing yourself!

This week’s prompt is BUILD. The timer is set, so let’s GO …

I was not blessed as a builder. My school project accomplishments, even as a kid, tended to be destined to become an ashtray. Somewhere behind the wallboard in a house in Illinois is a hammer and a closet in the attic has a see-through panel to the rafters. In New Jersey, there is a patio where you can have marble races (unless they’ve fixed it). One of my outbuildings has a lot of lumber in it after I tried building a gazebo and couldn’t get past the first corner.

But I always had an imagination and consciously decided way back when to approach each new day with a new set of plans. Okay, not plans, but a blank sheet to be filled with memories. Most were non-descript, some were bad, but the vast majority were good. Over the years I have been able to build memories. That’s been my forte.

I have vivid and mostly good … STOP

… memories of my youth and wouldn’t trade in my growing up in the 60s days for anything. And there are so many memories of 40 years of marriage — shared memories of family, excursions, adventures. Most are good memories, save the last six months, which have carried me through.

Now it’s time to build more memories. In a couple of weeks, I’ll be camping with my grandkids in Abbott, ME. We plan on going to Adventureland and whale watching and nature walks and swimming and … but more important, being together — young and old. It’s the seventh junket in the eight years since Karen died, sort of her legacy. We’ve been to the Radio City Christmas Show — the traveling show in Cleveland and Boston and the real deal in New York City. Three years ago I booked an Easter cruise for them out of Boston. Then it was a whirlwind trip to the Jersey shore/Carlo’s Bakery in Hoboken/taking the ferry to New York City/Empire State Building observation tower. Last year, I decided to blend history — okay, football history — with fun and frolic by taking the kids camping in Wisconsin. The feature was Brett Favre’s induction ceremony into the Packer Hall of Fame at Lambeau Field. 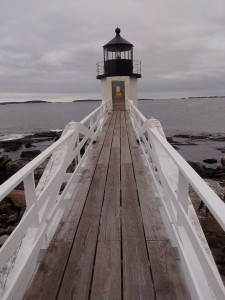 And it’s time to build some personal memories as well. Since migrating to Maine — at least on a part time basis — I’ve explored Vacationland through four seasons. I’ve been to Auburn/Lewiston for the day; Aroostock County in winter; downtown Portland; on the Tumbledown Mountain trails; the Reversing Falls in Pembroke; downtown Augusta; and Friday (hence the late post) to Marshall Point Lighthouse on the coast in in Port Clyde. Each adventure etched another memory.

Each day awakes anew with hope and potential memories to build.

What memories are you building?

THOUGHT TO REMEMBER: What if we stopped complaining about our Starbucks order being incorrect and bought a meal for the homeless guy standing on the corner with no shoes and a cardboard sign.