In the Blink of an Eye … In the Beginning 1

Posted on June 17, 2015 by wisdomfromafather

Love is patient; love is kind; love is not envious or boastful or
arrogant or rude. It does not insist on its own way; it is not
irritable or resentful; it does not rejoice in wrongdoing, but rejoices in the truth. It bears all things, believes all things, hopes all things, endures all things…
1 Corinthians 13:4-7

Where do I begin?

The truth of the matter is the first time I saw your mother, I almost ran her over.

You probably all know, Mom initially was going out with Uncle Bernie. One night back in the spring of ‘66, Bernie and I were just cruising like we usually did on a Saturday night. We were in my ’57 Studebaker Silver Hawk and Bernie was telling me about this girl he dated. We should drive by her house and see if she’s around. You should meet her, he said. 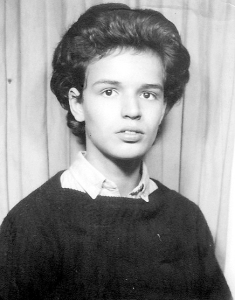 So it was down Albion Avenue I went and sure enough there she was in the middle of the street talking with some friends and watching her sister jumping rope if I remember correctly. The Studebaker was a sports car with a long nose and a low seat. Mom was so darn skinny, the way she was turned I almost didn’t see her and I almost did hit her.

Talk about a first impression!

I really wasn’t impressed. She seemed nice as we talked but, man, was she skinny! I bet you she must have been all of 90 pounds.

But Bernie liked her and that was OK by me. I was going out – not steady but fairly regularly – with an Irish girl named Nora Daley. Neither Bernie nor I remember quite how we got into these relationships, but we sort of traced it back to a girl named Pat Conklin who went to school with Karen. They weren’t friends, but friends of friends, and somehow or other, I ended up with Nora and Bernie ended up with Mom.

I remember the first time we went out on a double date. I was the impetuous one and decided about 8:30 on a Friday night I wanted a sausage and pepper sandwich from the Jersey shore. So we went. Now the Jersey shore is about an hour and a half away from Paterson so it was about 10 o’clock when we got to the boardwalk. We got our sausage and pepper sandwiches, walked the boardwalk, strolled on the beach under the stars and Mom came over to me and whispered, “I have to be home by midnight.”

True story. Honest to God. It’s after 10, we’re 85 miles away and she had to be home by midnight!

We literally ran back to the car (taking a time out for a Kohr’s frozen custard) and headed home. Didn’t quite make it back by midnight, but it wasn’t too bad … maybe a quarter after. Mom was grounded for a week!

Meanwhile, Mom and Bernie, as well as Nora and I, continued to date. Occasionally we would date other girls, but we generally stuck with Mom and Nora. We didn’t double date a lot, but it wasn’t unusual to meet at Pizza Town or the hot dog joint after a movie (Not Rutt’s Hut, though, that was “guy” territory where we threw the BS about our dates).

To make a long story short, Bernie got drafted. He went out with Mom, but didn’t love her. She was fun to be with, but it was all one-sided. But, she was starting to fall in love with him. I eventually took her to Fort Dix, where Bernie did his basic training, and he told her he was going to Vietnam and to forget him. It was his way of letting her down.

I remember the ride home. All she did was cry … and even my stupid jokes (yes, I even had stupid jokes back then) didn’t cheer her up. She really went on a downer. Over the next couple of months, I would find myself calling her up just to chat. It wasn’t threatening. We didn’t have a relationship.

She became a friend with a different perspective from my guy friends … Bernie, Carmen and Murray. The way she listened is really what attracted Mom to me.

For example, I was going through a particularly dark time in my life as well. I was in the top 10% of my class at Don Bosco Tech and found myself in classes at Manhattan College with more kids than we had in the whole DBT school. I was also enrolled in electrical engineering, started classes a week late because of a scheduling error and was hopelessly lost. I also had “issues” with my mom and dad.

To bring things into perspective, I really thought I was going crazy. In one of my conversations with Mom, I mentioned the mother of another friend of mine was a psychologist. She knew what I was going through and said she was willing to talk me through it.

Mom convinced me to go … and reinforced the therapy during our late night talks over tea.

THOUGHT TO REMEMBER: Over prepare, then go with the flow.