Posted on August 16, 2014 by wisdomfromafather

Those of you who know me either personally or through this blog know I have this fascination with Maine. Over the past six years I have trekked to the Pine Tree State well over a dozen times and have visited and looked at homes on the coast, north country, central, metropolitan and, most recently, western Maine. Towns like Dexter, St. Albans, Ripley, Newport, Dover-Foxcroft, Casco, Lubec, Island Falls, Harrington and most recently Bryant Pond and Rangeley are familiar to me. And, as a follower of the Bangor Daily News, I can identify with many of the story lines and datelines.

You may not know how this fascination began. Well, it dates back about seven years or so when I nonchalantly asked Karen where she wanted to retire to. After a couple of days of thought, she blurted out, “Maine!”

To this day, I do not know why she chose Maine. We had never been there. We didn’t know anyone who lived there. Maine had never come up in our conversations.

But we started to look online and discovered houses were relatively inexpensive, taxes were a lot less and it just “felt” like a good choice, especially since both of us liked the rustic life and are not intimidated by snow and cold.

I even went so far as looking at employment opportunities and, in fact, applied for two positions — one in Aroostock County (waaay up north) and the other in the Augusta area. Karen got busy househunting online with a realtor she never met.

Of course, everything changed six years ago. Instead of visiting Maine, we spent that spring/summer visiting doctors as she battled cancer.

In light of her wishes — and as part of my healing — I made it to Maine for the first time in January 2009. I picked up where she left off house hunting and found an old church in Dexter I thought would make a good rehab project. I got there on the coldest day of the year surrounded by drifts. The church was great — but much bigger than I first imagined. It had great potential … but not for a 60 year old.

I did find the “perfect” house in St. Albans … but the timing just wasn’t right.

Since then, I have looked at dozens of homes, including the latest in Bryant Pond and Rangeley. Each had positives. Each had negatives.

Since it is just me, I’m not looking for anything too big, preferably on one level with two bedrooms and overlooking water. Since I am still working in New York, ideally I would be looking for a short term lease with an option to buy as I transition into retirement {hint … hint}.

During my trips to Maine, I have discovered “Maine — The way life should be.” The people have been friendly with that small town feel. When I first got to Dexter, everyone — from the police chief to the innkeeper — knew I was “that guy from New Yoowrk” who came to look at houses. I was welcomed at events and churches like an old friend. I can truly say I feel at home when I visit, regardless of the area.

And they have a tremendous sense of humor. Western Maine is kind of mountainous and rural. As I traveled my navigation app would drop. I anticipated that might happen so I printed out directions, However, if I drifted off course, I would be totally lost … perhaps never to be found again. So I picked up an old fashioned map. There it is … a box giving moose viewing tips. And another giving moose crash tips — “Apply brakes … let up just before impact … aim for the hind end … duck down.” 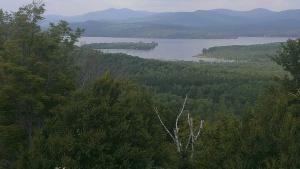 Except for a few hours on the New York Thruway to Albany and a stretch of Route 91 in Vermont, getting to western Maine from upstate New York consists mainly of winding roads, mountains and valleys. Tremendous and breathtaking views.

But as I was twisting and turning, the thought hit me. If and when I made this move, I am going to be alone. I’m not afraid of being alone. I am quite comfortable in my own little cave. It bothered me when I thought of the alone. This was supposed to be our adventure — Karen’s and mine. And that is just never going to happen.

THOUGHT TO REMEMBER: If you get the chance to travel across the country or across the globe, take it. You will learn way more from people who are different from you than the ones who are the same.