Posted on August 4, 2013 by wisdomfromafather

I was in the office the other day and started hearing an “arrr arrr pop putt putt putt putt” sound from the garage. It was uneven and rough, but the Beetle was alive again! 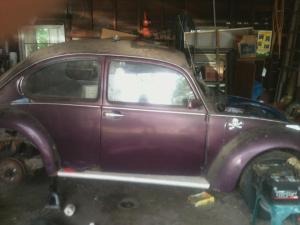 The Beetle is a ’71 I picked up for Karen back in the spring of 2007. I had spotted it across the street from Minardi’s Bakery when I went down to visit my Dad in New Jersey. A couple of trips later with Karen in tow, she was the proud owner of a purple bug.

It was in pretty good shape. The glass was good. The interior was like new. It had to be jump started, but it purred like a kitten, despite the fact the owner — who had intended to strip off the skin and use it as a dune buggy — had replaced the single stock carburetor with duals and added a turbocharger. There were just a few spots that needed some cosmetic work.

It featured spikes on the bumpers and wheel covers, a few in the interior, tear drop California styled tail lights and a hand-painted skull and cross bones painted on the gas lid. I did have to get the front floorboard welded and the heat/defroster was, well, vintage VW — non-existent.

It handled quite well for a tiny bug and quickly became Karen’s pride and joy. She wasn’t afraid to take it on the road and with its turbo and dual carburetors it would easily stay with highway traffic and handle hills. She decided she wanted custom plates — JSTMYBUG — and used that car instead of the pedestrian Taurus whenever she could throughout the summer of 2007. She only took it out once in 2008 as she battled the effects of her cancer.

I periodically started the car after she died for awhile, but eventually it just sat there in the garage … until my son and grandson started tinkering with it. After tracing wires, repairing those chewed by mice and cleaning out mouse nests, they got to the intended sound above. Since then, they have been spending time in the garage. I know they have to put in a new wiring harness and do some brake work, but Jay and little Jay think they have a game plan that will put it back on the road by next spring.

The other day Jay came in to ask me what color I wanted it painted. That’s a good question. It’s faded purple right now. I thought it was originally blue, but Jay doesn’t think so.

Little Jay wanted it flame colored — he is 10! I’m not sure I’m ready for that! I was thinking about yellow or deep blue, popular colors of the year. But the more I think about it, perhaps purple would be more appropriate. I bought the car for Karen and purple was her favorite color. I can envision it in my mind’s eye — a deep purple fleck with JSTMYBUG custom plates.

What do you think? I’d love to hear some thoughts on what color to paint the bug.

THOUGHT TO REMEMBER: A gentleman is one who never hurts anyone’s feelings unintentionally.

8 Responses to Color the Bug