Posted on September 27, 2020 by wisdomfromafather

Normally, Sunday means a devotional, sermon or sermonette. But this Sunday — today — marks the 12th anniversary of my wife Karen’s death, a day that impacted myself, my family, and everyone who knew her well beyond her years. She continues to be an inspiration … and I hope to continue highlighting her legacy via this venue.

The two thoughts — the remembrance and the reflection — dovetail together. Karen’s life — especially her last few months — was a living sermon on grace. Words are just a crude way to express this grace; you really should have seen it.

Throughout Karen‘s diagnosis, I tried to stay optimistic, looking for that miracle. She knew better, but instead of dwelling on her death, she used the time to reflect on her life and put things in order {putting things in order was her specialty}.

After five months of diagnosis and treatment, 10 days in the hospital — including our 40th anniversary — and two more weeks of radiation, it all came to a quiet end. Those days are etched forever in my mind.

During her radiation treatment, she started complaining of pain, but refused to have any more tests. We had a doctor’s appointment Tuesday and her oncologist came in with the dreaded news, the cancer had returned – both in her liver and lung. There was nothing more that could be done. It was too soon to restart chemo and too extensive for more radiation. The best they could do was keep her comfortable until it was time to let go.

Karen was so weak, but she was still stoic. We conference called the kids Tuesday afternoon with the news and they immediately dropped everything to make a quick arrival despite most being way out of town. All she wanted was to see her kids again.

The plan was for me to give them the letters and sentimental “things” to remember her by after she died. But when they all got there by Thursday night (Sept. 25), she wanted to say goodbye to her kids personally.

I know it was emotional for them, just as much as it was for Karen and me. But she wanted me to let them know they all were her life.

In her letter to me – yes, she wrote one to me as well – she wanted me to make sure each of our children knew, though she made a lot of mistakes along the way, she did her best and above all, she loved them with all her heart and soul … unconditionally.

Karen had a rough Thursday night/Friday morning, but we were able to talk alone, walk down Memory Lane again and say the things we wanted to say to each other. Early Friday morning, she said she was tired of hurting. I told her it was okay. It hurts – and it will hurt – but we would rather hurt than her. When she was ready, just go. Our Lord was waiting.

She was basically unresponsive all day Friday, Friday night and Saturday morning, but her breathing became more and more labored. At 12:35 p.m. she opened her eyes and we all gathered around her to tearfully say goodbye. She took her last breath at 12:38 p.m. Saturday, Sept. 27, 2008. 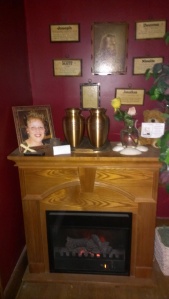 I don’t know much about the mechanics of death, but I do know Karen faced it with grace and dignity. There was no apprehension. There was no tension in her hands.

It may not be scientifically nor theologically true, but I believe her eyes opened to the glory of eternity as she saw her Lord and Savior come with open arms to embrace her and bring her to the Father.

She wrote to me, “Ready or not the Lord is going to bring me to a new home. I’m not sure He’s ready but who am I to question? I do wonder what it is like. I guess we are always afraid of the ‘unknown’ and, trust me, I’m no different. Eternity is a long time. Do you think I’ll be charged with cleaning? Maybe cooking? Wow, can you imagine the kitchen I’d have there? I could do the cooking and be in heaven … literally.

“The only thing I know for sure is that there will be no more cancer, no more tears, no more tiredness or sickness, swollen bodies from fluids and poisons. Just, joy, laughter, praise, worship and glorious peace.”

There hasn’t been a day since that day when I haven’t felt her presence in my life.There was a Funky Winkerbean cartoon I taped to the file cabinet next to my desk. I looked at it every day. Les Moore lost his wife to cancer and he is driving with his daughter Summer. She asks, “Dad … Do you still miss Mom?”

Next frame, Les responds, “There hasn’t been a day. But after a while, you begin to understand …” Jump to frame three. “That you can’t let your grief become the substitute for the one you love.”

It took me a while to take that in, to understand it, to make it make sense.

Everyone grieves differently and at a different pace, but the commonality is grief has a way of muddling life. Your perspective becomes clouded. Every day activities look and feel differently. Often, it takes all your energy just to get out of bed. There is no such thing as a routine. Life looks more like a jigsaw puzzle straight out of the box. Emotions are raw and unpredictable.

That was me. Only through the amazing grace of God did I get through it.

Fortunately, my faith kicked in … and kicked me into proactive action. These are the steps I took. Others may have different journeys.

First, I recognized I needed help. I was floundering on my own and needed a fresh perspective. I wasn’t sure about it, but I joined a bereavement support group just starting through the spiritual care department at a local hospital.

I was the “rookie” in the group. My wife had died less than a month prior. The others had been walking the journey for three, four, five, six or more months. The experience was invaluable. We started with a river of tears and ended with hugs and even smiles. Somehow recognizing others are going through the same struggles brings us closer. I was no longer a “victim.” As sad as that time was, I was fortunate to be have been able to say goodbye. Others in my group did not have that opportunity.

During our memory walk, Karen had told me how much she loved the sunrise we had seen in Florida. She told me she was sad we wouldn’t see another. We had planned on going to the Jersey shore to see another one, but we never got around to it. So, one weekend in early November, I packed her up {one of the advantages of cremation} and we watched the sun rise over the ocean. It wasn’t the same, of course, but I felt her presence on a crystal clear, albeit chilly night turned morning.

Then came Thanksgiving. Again I placed her in the truck and headed to Illinois for Thanksgiving dinner. It was bittersweet, but it gave the grandchildren from the west a chance to say their goodbyes to Grandma. We placed the urn on a mantle and they respectfully visited with her.

The turning point of the trip, for me, though was a comment my then four-year old grandson made. To set the scene, our urns sit side by side encompassed by intertwining rings. Our names are on a plate in front of our respective urns. My grandson said he understood about Grandma, but was confused. “How can you be in there when you’re here?” he asked. We explained that would be my FUTURE home, but what resonated to me was I was still here and God still had something for me to do. Didn’t know what it was, but out of the mouth of babes …

That was the tipping point. I decided to start living, albeit with a hole in my heart that has since scabbed over, but has not and probably never will be filled in.

I also wrote a memory book, detailing our life together. 40 Years of Memories … In the Blink of an Eye was written for my kids and grandkids. It included anecdotes, photos, birthday, holiday and anniversary cards and even some love letters chronicling our 40 years together, from our first meeting through our wedding, our moves and stages in life, right to the end. I had intended it to be a Christmas present, but it turned into a six month project. While I hope they treasure it, it was a catharsis for me. Despite the tears, I was able to rebuild the memories … and those memories have helped to salve the hurt. 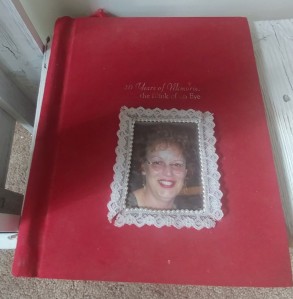 Finally, I surrounded myself with positive, grounded people. In particular, we had a family friend who lost her husband to cancer a couple of years before Karen died. She had an editorial background, so I sought her out to help edit 40 Years of Memories. She turned out to be more than an editor. She became my mentor, walking me through the minefield of grief and lifting me up whenever I drifted back toward the dark side.

Karen has always been my earthly rock. She supported me through multiple moves halfway around the country. She encouraged my involvement at the pulpit and ordination as an elder. She planted the seed of retiring to Maine. She was the inspiration behind my free time writing — this blog and my four books. She still inspires me.I can hear her cheering me on. I know she is lobbying and praying for me from her heavenly perch.

We all have some regrets. If I had it all to do over again, I probably would change some of my reactions. I would have listened more, talked more, communicated better.

But I don’t think I would have changed anything substantively. I loved Karen just for being her … the way she was. And I know she loved me for just being me … the way I was … faults and all.

It was a great ride.

My prayer is when it is time for me to join her, I have the same peace, grace and dignity.

THOUGHT TO REMEMBER: There will always be another step on your journey, and that’s why it’s so important to have that anchor inside of yourself. – Nikita Chopra