Spray Paint, Murals & a Fork in the Road

Posted on April 16, 2020 by wisdomfromafather

Any place you travel has a host of quirky sites and attractions. Kentucky is no different. I spent a couple of nice late Spring days sightseeing … all the time using appropriate social distancing {not too hard since there were only a few people out and about}.

A couple of weeks ago, Angelina and I ventured to Simpson County in southern Kentucky to witness first-hand the phenomenon of Spray Paint Road. As an extra bonus that day, I stopped at the Franklin/Simpson County Visitor Center to take in a collection of murals on the back wall. Last week, we literally came across a Fork in the Road.

Spray Paint Road is located in the middle of nowhere, between cornfields and other farmland. You really have to search for it, zig zagging through the back roads of Kentucky with houses about every quarter mile or so. 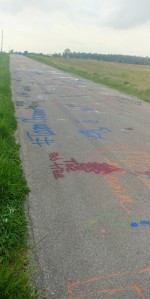 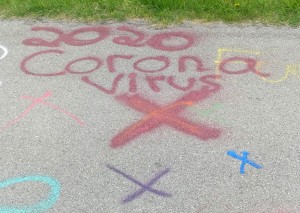 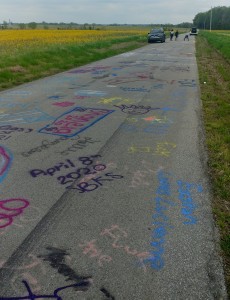 You won’t actually find Spray Paint Road on a map. It’s actually Kummer Road. I won’t say it was the most interesting place I have ever visited, but it was … well, different. The graffiti and spray paint art along the 3/4 mile stretch of the mile and a half road is littered with spray painted graffiti — the kind you might see on overpasses, water towers of freight cars, like all sorts of images, sayings, dedications, dates, initials, and just about everything else in spray paint on the road. I’ve included some of the more imaginative ones {see pictures}. 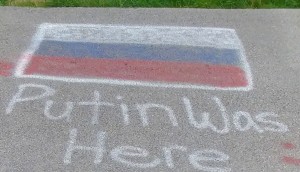 The tradition apparently dates back decades. I actually confirmed that when I spotted a family adding their art and the matriarch told me through the open window it was a tradition back when she was in school “… and that was 20 years ago.” Down the road a bit was another family memorializing their artistic talent. The irony is the stretch of road is between two cornfields, both of which were being actively worked.

Some say the tradition and hobby of painting the road began back in the 70s, but it was definitely in full force by the 1980s. At one point, the road was paved over, but that didn’t stop locals from continuing their artistic expression, allegedly before the asphalt was even completely set.

I also discovered a neat eight panel outdoor historical mural at the closed Franklin/Simpson County Visitor Center. The pup and I walked along the trail taking it in. The detailed, realistic murals are painted on a 200 foot long highway retaining wall built along US Highway 31W. 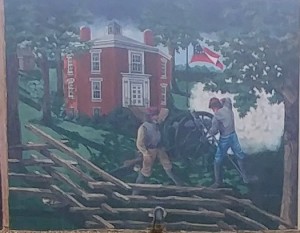 he murals depict scenes from 200 years of Simpson County history. An underlying theme linking the painting is the changing modes of transportation along the “Louisville to Nashville Pike”. They included horse-drawn carriages, Civil war steeds, train locomotives, mules, farm wagons, automobiles, pickup trucks, school buses, tractor trailers and recreational vehicles — each artistically showing the role they played in the development of this major national north-south highway. The paintings depict the advances in transportation over the years and serve as a metaphor for the growth of Franklin and Simpson County.

According to the Kentucky Tourism

website, moving from left to right, the paintings journey from dawn to sunset and also chronologically through the seasons from winter to fall.

Mural 4 is “High Noon – The Courthouse”

Not being from the area, the significance of the depictions may have gotten lost while taking the self-guided tour. There is a capstone in front of each that does put the painting in some historical context. And I did learn about two of the area’s famous sons. Jim Bowie invented the Bowie knife. Old Jim fought at the Alamo. Alexander Majors was a co-founder of the Pony Express.

I was alerted about the Fork in the Road following a brief blessing Facebook post about my Franklin adventure. So, naturally, this was one I had to see for myself.

My oldest son Joe and I and Puck {his dog} and Angelina ventured out to the east side of Franklin. Along the back roads we came across — literally — a fork in the road! Okay, it was a planned trip to see the fork in the road just outside Franklin.

The 20-foot tall salad fork stands at the junction of Bunch Road and Uhls Road, northwest of town. It was, according to news reports, commissioned by Kent Kelly, and was constructed by the Franklin-Simpson High School Class of 2018 welding class under the direction of welding teacher Jeremy Loveall, who oversaw the statue’s design and assembly after first presenting the idea to his students. Traughber Mechanical Services completed the laser-cutting of the fork’s handle and prongs, and Hill Valley Concrete poured the base.

The statue is a detailed 680 pound, 21-foot tall, steel utensil, anchored into the ground by 2,000 pounds of concrete. At the base of the statue, there is etched the number 2018. Ironically, it is the street address for the house closest to it.

See, the things you can learn if you take the time to look.

THOUGHT TO REMEMBER: Perseverance is failing 19 times and succeeding the 20th.

4 Responses to Spray Paint, Murals & a Fork in the Road