Posted on October 31, 2019 by wisdomfromafather

I’m not a big fan of Halloween. I never was … even as a kid. I never got into it as my five children looked forward to trick or treating. I still keep my porch light off on Halloween night, although I did have to man the candy bucket when my wife was around.

Speaking of candy, that was the only redeeming virtue of the holiday. I may not like the celebration, but I’m not adverse to sharing the spoils. 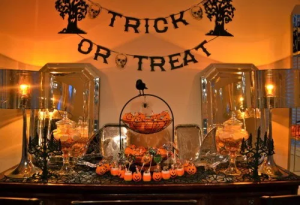 Of course, Halloween today is very different than when I was growing up. We pretty much stayed in our own neighborhood or were driven to relatives’ homes. We didn’t have to worry about tainted candy. About the worst bounty was fruit {although unwrapped candy or caramel apples were acceptable}. Our costumes were simple {okay, sometimes creative} and almost never overpriced store bought {except for a mask}. Dress up characters included hobos, ghosts,mummies, princesses, witches, pirates, cowboys, soldiers, pumpkins, and animals. As I got older, costumes got scarier — unfriendly ghosts, really scary witches, vampires, superheroes, ghouls — and now we have zombies, serial killers, and gore, many prepackaged just in time  for Halloween fright.

I don’t recall too many Halloween parties. Now there are church, service club, and  community celebrations aimed at controlling the fun. “Haunted houses” were around, but the level was mild — maybe spider webs and an occasion ghost around a corner and someone suddenly sitting up in a makeshift coffin — compared to today’s focus on fright and enhanced technology.

I didn’t go to too many parties and probably after age 10 or 12 opted to stay home and guard the candy dish rather than go out in the dark, often damp night.

Interestingly enough, I do remember a YMCA Halloween party I attended. I was probably 12 and may have met my wife there. I don’t remember it, but apparently we were both at the downtown party that year. She was a princess — one of about  1,000 princesses {okay, that’s an exaggeration} at the party. She insists she remembers me, primarily because of my unique costume and the fact I planted myself near the refreshment table. I remember my home made costume and, yes, I was the only robot at the party. It consisted of a big foil-wrapped box. My arms, gloves, legs, and shoes were also wrapped in foil and I had a foil-wrapped plastic bowl on my head with eyes, nose and mouth cut out. There were red dyed pipe cleaners affixed to the bowl and colored buttons on my chest.

And there is no truth that I was intentionally stationed at the refreshment table. It just so happens it was the first place I found. Do you know how hard it was for a robot to move 60 years ago?

THOUGHT TO REMEMBER: Look for something positive in every day, even if some days you have to look a little harder. — Zig Ziglar