Posted on February 4, 2017 by wisdomfromafather 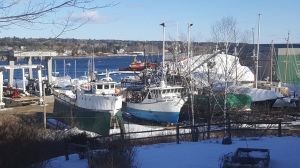 In this case, it’s a craggy county on the coast of Maine, next stop on my adventures learning about and visiting the four corners of the Pine Tree State.

Today appeared to be a good day for exploring. The temperatures moderated from the -10 {that’s right, minus, negative} when I opened my peepers to 22 by the time I started the car around noon. It even climbed to 28 as I journeyed closer to the coast. The sun was bright and warm. The only down side were occasional gusts that reminded drivers it was still very much winter.

I chose Belfast as my destination. I had been there before — actually lost trying to find my way home from Marshall Point Lighthouse — and it looked like a quaint little town with an expansive harbor at the mouth of the Passagassawakeag River off Penobscot Bay. 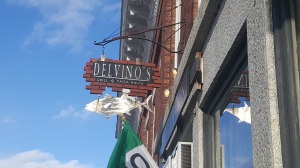 I drove to the harbor and was surprised at the number of people milling about. Then again, it was almost a picture perfect day in Maine. I stalked some locals — okay, I didn’t actually stalk — but listened in over a cup of ice cream on a bench near the water on a conversation the couple was having about where they were going to go for dinner. After a back-and-forth naming different establishments, she suggested Delvino’s and he quickly agreed. 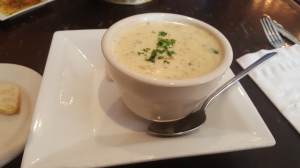 Good choice. I was there as a tweener — just after the lunch crowd and before the dinner service — but I was far from alone. The place was over half full with patrons talking, laughing and enjoying the food set before them. 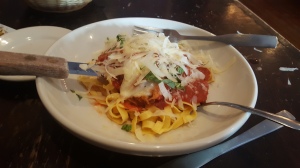 I quickly joined in sans the talking and laughing since I was alone. But, boy, that food was good. I chose a cup of haddock and bacon chowder {one thing about Maine restaurants, they don’t skimp on the fish} and the veal Parmesan. It came with garlic infused oil for the warm bread and a house salad with homemade balsamic vinaigrette. Buoyed by lower than expected glucose readings this morning, I added the toasted almond cake to the tab {maybe I’ll skip checking tomorrow}. That was the best toasted almond cake I have had in many, many, many moons. The only rub was the paper-thin veal. You don’t want a thick piece of veal, but this was so thin it was overpowered by the fresh fettuccini, house marinara and mozzarella. 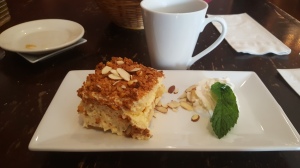 After dinner, I took a stroll up Main Street and down Church Street, stopping in a couple of the more eclectic establishments in the historic downtown. I was surprised most of the stores were open in early February and in talking with owners, discovered winters in Belfast are “lean” as they await the summer season — June-September. But they keep plodding along and, on a day like Saturday, visitors visit the quaint shops from miles away {I came from 61 miles away, although, admittedly, I didn’t buy any knicks or knacks.}.

Next will be somewhere in Washington County followed by York County. That’s it. Another step closer in checking visiting all 16 counties in Maine off my bucket list.

THOUGHT TO REMEMBER: The darkest day can become brighter when we activate our attitude of gratitude.