In the Blink of an Eye — Pennsylvania Avenue 4

Posted on September 23, 2015 by wisdomfromafather

A glad heart makes a cheerful countenance, but by sorrow of heart the spirit is broken… Proverbs 15:13

Like I said, Mom went through post-partum depression and ran herself ragged. Deanna was impossible and didn’t want to sleep anywhere except in her crib. So we never went out. She was also a rocker and put her head through the crib headboard.

Meanwhile, Joe was being a typical toddler getting into everything – like repainting the living room walls with butter. I was working more, still at night, so Mom would try to keep the kids quiet during the day so I could sleep. It really wore her out physically, mentally and emotionally … and I was helpless. I would do what I could, but I was helpless.

I think it was the prospect of buying our first home that actually lifted her spirits. While covering a game in Sparta in early summer 1972, I noticed a new development going up in Ogdensburg. In my quick math mode, I figured we could probably buy the house for about the same as we paid in rent. How naive. But it was a way out of Paterson and a shot I was willing to take.

The next day, we packed Joe and Dee in the car and up we went to see the area. At that time, the land was just being cleared and there was only one “show home” and a couple of others under construction. We went through the figures and calculations. Since the house was under construction, we could “save” some money by not adding a gambrel roof, doing our own painting, etc. All we needed was about $3,000 down – the equivalent of about $1,000,000 today.

Somehow (divine intervention?), the pieces fell into place. I got an unexpected raise (a whopping 15 cents an hour), found a buyer for the Chevy wagon and a reliable replacement, kept filling our water jug with loose change and culling as many extras from the house as we could (finished basement, painting, landscaping except for some basic seeding, the gambrel roof over the door, etc.). The mortgage application somehow went through. We were going to be new homeowners!

I made sure I was assigned to Sussex County as much as I could so I could keep tabs on the progress of the house. I was scheduled to cover the Sparta-Franklin football game on Thanksgiving morning 1972 … and became one of the tackling dummies on the sideline. It was so cold, I never felt the impact, but as I thawed that day, my back started hurting more and more. So now Mom had three babies to take care of as well as worry about moving and whether this move would take place at all.

She was a trooper. She waited on me hand and foot, got me juice, brought me my meals, just sat with me when she had a chance. As I look back now, it isn’t any different than me taking care of her. I guess she taugh 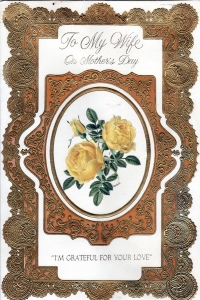 t me a lesson during those six weeks on how to love unconditionally.

We made it through to Ogdensburg, which means this is probably a good place to transition …